Blog - Latest News
You are here: Home / Festivals / Day of the Dead in Mexico: a time to celebrate 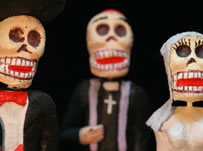 Anyone lucky enough to have already seen the latest Bond film, Spectre, will have been treated to the most fabulous opening sequence shot during Mexico’s Day of the Dead celebrations.

The Day of the Dead, or Día de los Muertos, is not the morbid event it may at first appear: to the contrary, it is an uplifting fiesta, celebrated mainly in Mexico, to remember and pay tribute to friends and relatives who have died.

It is believed that the souls of the deceased are believed to return to earth on this day, which falls on 2nd November each year, in conjunction with the Catholic holy festival of All Saints’ Day (Día de Todos los Santos) on 1st November.

As with many Mexican rituals, the Day of the Dead has pre-Hispanic roots, dating back some 2,500-3,000 years to the Aztecs, Mayas, Olmecs and other indigenous civilisations. In Aztec times the festival was celebrated in August, the ninth month of the Aztec calendar, and for an entire month. In modern-day Mexico, celebrations take place in November, and the day before Día de los Muertos, 1st November, is dedicated to lost children and infants: this is known as Día de los Angelitos, or Day of the Little Angels, as children who die are believed to automatically become angels.

On the Day of the Dead families traditionally build altars in their homes and visit graveyards to commune with their lost loved ones. They take offerings, or ofrendas, of sugar skulls, garlands and flowers (often marigolds, which have ancient ceremonial importance), and personal gifts such as photos and favourite foods of the departed. It is thought that these will encourage the souls of the dead to visit, and pillows and blankets are even laid out so that they can rest after their long journey. Many people spend all night beside the graves of their relatives. But it is a happy atmosphere that prevails, with dancing, feasting and the recounting of affectionate anecdotes.

One of the best places to experience Day of the Dead is around the beautiful region of Pátzcuaro in Mexico’s Western Central Highlands. Mexicans and sightseers flock here to remember their loved ones and join in the renowned festivities, which include traditional music and dances, candlelit vigils and picturesque ceremonies.

Cactus offers Spanish courses in 4 locations across Mexico, including Oaxaca which is famed for its Day of the Dead celebrations. Spanish courses start each week, from one week upwards, and can be combined with accommodation and meals with a local family – the perfect way to immerse yourself in the language and culture. 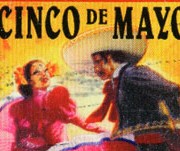 Cinco de mayo: a day of history and celebration in Mexico
1 reply

“I was one of the five finalists of the Suzanne Furstner Scholarship and I have completed my TESOL from Oxford TEFL, Prague. I want to thank Cactus for offering opportunities to teachers which allow professional and personal growth. The experience was extraordinary and I was trained by experts. Though the course was intense, I enjoyed every bit. Thank you once again!”

“I had a great time in Brooklyn. The school has very good teachers, nice staff, a great view and small classes. I'd love to go there again. Thank you!”

“My view as a parent is that the programme in Denia was excellent. Tayo is much more confident in her Spanish and has enjoyed writing and speaking the language a lot more.
The family and the accommodation was just perfect as she got an opportunity to practise her Spanish all the time. She is a very fussy eater but she enjoyed the cuisine she was served. She had a great time. Denia is quite self contained with a lovely coastline and I would recommend it for teenagers and families. The whole experience for an educational trip was just wonderful.”

“The school is one of the best I have been to in terms of teaching and extra workshops and cultural activities available to students. My host family made me feel very welcome from the start and lived very close to the school.”

“My teacher's humor and artistic skills makes her delivery very effective indeed. The school is conveniently central and fit for its purpose. Everyone is friendly and professional. Murcia is a very interesting city, very beautiful and warm. The people are very friendly and the food is excellent. Can't miss it!”

“Bath is definitely a good place to learn English. The teachers are extremely competent and very friendly, the social activities are great and there is a really good atmosphere. It’s great to meet people from different parts of the world and at Bath you definitely find it!”

“The lessons were very well structured and easy to follow. I was a little apprehensive as I'm a beginner. But the staff were helpful and understanding.”

“The teacher was excellent, he knew how to balance different knowledge levels of the students.”

“I have just returned from a 2 week language course in Florence. Everything was great, the course was well organised and information beforehand was good. The accommodation was perfect for my needs and an excellent location for the school. The teacher was really good and very helpful swapping things around when need be. I loved it and will definitely be signing up for another course next year.”

“I wanted to let you know that Phoebe had a really great time in Valencia. The family she stayed with were delightful and Phoebe got on with them really well. I think she has plans to return to the school next year for 3 months to try and perfect her Spanish even more (!). From a parents' point of view, it was fantastic and I will be recommending you to others.”

Win a TEFL Course in London or Bogota!
Scroll to top