I am currently writing this entry while on a Shinkansen (Japanese Bullet Train), and boy has it been an adventure! I was waiting in line to get on, thinking that since someone was in front of me, there was a rule that you had to wait until they said it was okay to enter the train. Apparently he was just waiting for the next train. So, I missed my train by one second – literally! Fortunately, the staff at the station was very understanding and told me to go on the next one, which would arrive 6 minutes later. I’m now on that train, and it looks like I’m getting to my stop earlier than before! So I’m happy to say that I’m still looking forward to an awesome weekend with some friends that I made on my first trip to Japan.

I’ve been going every weekend to the Cat Café and let me tell you that it really makes the homesickness hit me less. It’s relaxing and enjoyable. I’ve also gotten really good at metal games. This is a big thing in Japan. You put a metal coin into a slot and aim it to get more coins out. Meanwhile you get chances to earn more metals and even a jackpot every now and then. My friend and I have won the Jackpot four times already. All the Japanese stare at us when we do because it’s weird to see a foreigner who actually knows how to play.

I’ve also had fun at the local Mai-Dreamin Maid Café. In case you don’t know what a Maid Café is, I’ll explain. It’s a restaurant-type place that has lots of cute food and all the workers (except those at the bar) are dressed up as lolita maids. Before you eat or drink anything, you “bless” it to make it yummy. It’s all very adorable. Usually the regulars are older Japanese men and the occasional foreigner – but they’ve come to recognize me as a regular too. It’s quite expensive, but lots of fun. It’s a great way to practise Japanese too!

In class, I’ve learned a lot. I now know how to speak informally with friends. When I came I could only speak very formally, so it’s useful. I can’t wait to show my friends what I’ve learned. I also have learned around 130-140 kanji, although I’m not perfect at all of them.

Today I say good-bye to one of my good friends, Jose. He’s from Spain. On Thursday we had a final going away party (although there were many before this). Our teachers even joined us! Can you imagine having beers with a professor? In America that’s kind of taboo, but apparently here it’s okay. It was really fun, and also helped a lot with my speaking. It was almost like I got free one-on-one time with my teachers. I could ask them questions if I didn’t know a word and got to know them a little better.

Dana is studying Japanese in Tokyo with Cactus. Cactus offers language courses in over 30 languages, in 60 countries and 500 destinations worldwide.

Dana wrote about her initial impressions of Tokyo when she first arrived, and we will be posting another blog entry by Dana at the end of her course. For anyone thinking about taking a language course abroad, this offers a unique insight into life in a foreign country, including the fears and excitement that come with a long-term course. Thank you to Dana for contributing to our website!

Image: The image at the top of this page is of a polaroid that Dana was given at the Maid Café, with Dana on the left and one of the bartenders (who likes to be called “Hisama”) on the right. 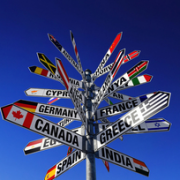 Business travel: why it pays to prepare yourself both culturally and linguistically

German course in Vienna: settling into a new life abroad Get off the Beaten Path - December 2010
Scroll to top