As a very religious country, spring time in Italy spells a number of religious festivals and events – the largest of course being Easter. Whilst being in large cities like Rome, Naples or Florence at this time can give you a great insight into the Italian culture, it can also mean that you have to battle the crowds and contend with shop closures and sky high prices. Here, therefore, are five alternative recommendations for springtime study in Italy and its islands.

Located in the north east of Italy in the region of Veneto, Verona is an upmarket and attractive city that has a long and interesting history. It has always been popular with tourists who come to see sights like the spectacular roman arena and the balcony that (if the myth is to be believed) featured in Shakespeare’s Romeo and Juliet. Winters in this part of Italy can be very cold and quite misty, and summers can be scorching – the spring time is an ideal time to visit, when there are fewer tourists and the days are pleasantly warm and long. Verona has plenty of squares where you can enjoy a lazy early evening cappuccino or gelato whilst you watch the world go by. If you fancy a day trip out of the city, well worth a visit at this time of year is the mountain town of Merano – situated in the South Tyrol, and two and a half hours from Verona by train, the city is well known for the pretty apple blossom and wild flowers that come into bloom at this time of the year.

As mainland Europe begins to warm up in April and May, the island of Sicily is usually a step ahead. During those months, the island’s capital Palermo can often see temperatures in the mid-twenties (Celsius), which gives visitors to the city a welcome taste of summer. This kind of warm, dry weather is perfect for enjoying those light spring evenings eating and drinking in piazzas amongst the locals, and soaking up the unique sounds and smells of this part of the world. 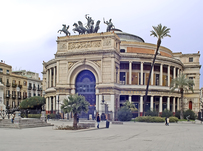 Palermo has some stunning architecture that reflects of a unique mix of influences, although there is also some beautiful natural scenery in and around Palermo – Mount Pellegrino provides an impressive backdrop to the city and the picturesque rocky coast and sandy beaches of northern Sicily are just a short bus ride away. A great thing about visiting them at this time of year is that there won’t be the crowds you get in the summer – you can peel off the layers and expose those winter ‘white bits’ without being in the midst of a enviably bronzed crowd! 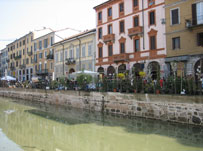 Milan may not generally be considered one of Italy’s most picturesque cities, but it’s well known for the lively atmosphere and cafe culture that exists there. The spring is a great time to spend a while in the capital of the Lombardy region – the weather is much milder than in winter, meaning that it’s nicer to take in the city’s sights and do a spot of shopping, and also that you can enjoy sitting outside one of Milan’s many bars and cafes. The navigli district of the city has become particularly synonymous with this kind of activity – it’s an area of pretty canals, that has kept its ‘bohemian’ image and emerged as a fashionable part of town in recent years. Here, there are plenty of places to enjoy a drink, and if you time it right, some early evening aperativi, which are offered free of charge to accompany your chosen tipple. 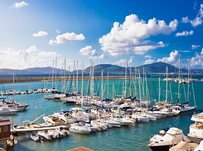 As with Sicily, anyone looking for an early start to summer should consider spending a week or two in Alghero this April or May. Located on the north coast of Sardinia, Alghero boasts a mild Mediterranean climate and some beautiful blue waters that offer excellent opportunities for sailing and snorkelling. Sardinia remains a popular holiday destination, with the peak season starting in June and running through until September. Taking an Italian course in Alghero in April or May will give you the best of both worlds, you’ll have warm weather and long sunny days but relatively few people to have to share the beaches and eateries with. The Italian school in Alghero also offers Italian and sailing courses, meaning that you can take the opportunity to learn a new skill whilst you’re there. Flight-wise, you’re likely to get a much better deal at this time of year too. 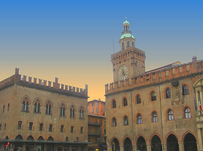 Bologna is the capital of the Emilia Romagna region of Italy, and is best known for its gastronomic prowess (many of Italy’s best-loved dishes originate from Bologna) and its old and prestigious university. As a university city, Bologna has a very lively buzz, which you’ll certainly experience if you visit during April or May before the summer term finishes. Although it’s well known for its culture and academia, the city of Bologna is also worth a visit in aesthetic terms…it has lots of historic, brick-red buildings, which although attractive at any time of year, will look even more impressive when basked in the light of a mid-evening sunset.