Blog - Latest News
You are here: Home / 10 reasons to learn English in Jersey

Here are ten reasons to choose Jersey as an English study destination:

Jersey’s location 12 miles from France in the bay of Mont St Michel means that it enjoys some of the nicest weather in the British Isles. It has lots of sunshine all year round and is mild in winter and hot in summer, which explains why it has long been a popular tourist destination.

Within the UK Jersey is known as an exclusive island with lots of wealthy inhabitants. There is certainly a lot of money to be found there, with lots of expensive restaurants and hotels that give the main towns a very up-market feel. This isn’t to say that all of these places are expensive though – there are still budget options to be found.

Jersey is home to around 30 beaches, many of which are long, sandy and golden. They’re perfect for sunbathing or for beach-based sports and are a great place to spend your evenings and weekends in the summer. As for the countryside on Jersey – only 45 square miles in size – it is green, pretty and unspoiled. There are strict planning laws in place to protect the countryside, which is also home to an array of wild flowers that prosper thanks to its ideal climate. The lovely countryside makes Jersey a great place to explore either on foot or by bike, and there are tracks and trails to follow all over the island.

4. A laid back atmosphere

Jersey’s pleasant climate and miles of sandy beaches give the island a definite ‘holiday’ vibe, which in turn gives it a relaxed and friendly atmosphere. There’s a nice pace of life on the island, which makes it a great place to study.

Because the island is so modest in size, it’s really easy to get around. There are also lots of bus routes around the island, although cycling and bike hire is also a popular option amongst students. Jersey’s compact size and community feel also means that it benefits from a low crime rate, making it one of the safest places to learn English in the British Isles.

6. Free airport transfers and a free bus to and from school for students in host family accommodation

Any English students who opt to stay in host family accommodation in Jersey will benefit from a free bus to and from school which is laid on by the college. They are also offered a free transfer to and from the airport when they arrive/depart.

7. A wide range of activities and sights 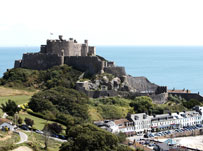 Jersey may be British, but its geographical proximity to France has brought about many disputes over its rule, and as a result it has ‘changed hands’ many times.

Jersey only became an island about 8,000 years ago – previously it had been joined to the French mainland. From 933 until 1204, the Island was ruled from Normandy but when war broke out between King John – who was also Duke of Normandy – and France, King John lost Normandy, and the Islanders chose to break their ties with France and remain linked to the Duke. This left the Island in danger of invasion from nearby France, and so defences and castles were built around the Island – many of which still remain today.

Over the next few centuries there were several attempts by the French to take the island – some successful, others not. The last time that the island was occupied was during the Second World War, although the island was liberated once again in May 1945. The story of this time is told at the Jersey War Tunnels, the Channel Islands Military Museum and the Island Fortress Occupation Museum.

Jersey is not like anywhere else in the British Isles. Its history has forged it into an interesting mix of French and English, although English remains the official language. You will see lots of French-sounding place and road names though, and there is a definite Gallic feel to the island. There’s no doubt that it’s a part of Britain, but with sunnier weather than the mainland and a much more laid back way of life!

As you’d expect from any island, Jersey boasts some amazing seafood, and some lovely seafood restaurants. Anyone with a passion for this type of food especially will be spoilt for choice, although there’s a good range of restaurants offering all kinds of cuisine.

English courses in Jersey are available at a range of levels and lengths. Students can choose between General English, Intensive English or Business English. For full details and to book please visit the Cactus Language website.

Focus on Brazil: an economy to watch