Blog - Latest News
You are here: Home / 10 FREE things to do in and around Malaga

These are two of Malaga’s best known sights and are well worth the steep walk up to see them. Dating back to the 11th century, the Alcazaba is a military fortress built by the Moors and partially inspired by La Alhambra in Granada. It contains three magnificent palaces and beautiful gardens with several ornate fountains. The Alcazaba also houses the Archaeological Museum, home of numerous Phoenician and Muslim finds.

The Gibralfaro Castle is situated just next to the Alcazaba, on land that is thought to have previously hosted a lighthouse built by the Phoenicians. On the remains of this lighthouse a fortress was build by Abderramán III and was later reconstructed as a castle by Yasuf I in the 14th century.

On Sundays admission is free to both attractions after 2pm.

Wander along the narrow, cobbled streets behind the main pedestrian street and you’ll find yourself in the heart of Malaga’s pretty old town. A far cry from the image that many people have of towns and cities on the Costa del Sol, the old town in Malaga is full of Baroque facades, leafy plazas and traditional shops and restaurants.  It’ll give you a fantastic insight into traditional Andalucia.

3. Soak up some rays on the beach

Andalucia enjoys at least a few hours of sunlight most days of the year and even January is usually temperate enough for a stroll on the beach. Malaga’s sandy beaches are really well-maintained, making them ideal for some swimming and sunbathing in the spring and summer.

Malaga’s Roman Theatre, unearthed relatively recently in 1951, spans 31 meters of the Andalusian landscape. It is situated at the foot of the Alcazaba and was used until the 3rd century; after that it was used as a quarry by the Moors to restore the Alcazaba.

On the last Sunday of every month admissions to the Museu Picasso is free. Housed in the Buenavista Palace, an elegant 16th century building, it exhibits over 200 works of art by one of Malaga’s most famous sons.

6. Take a walk through the Parque de Malaga

Malaga’s century-old city park, which runs alongside the Paseo del Parque promenade, is the perfect place for an afternoon walk. It is one of only a few exterior botanical gardens in Europe, and is full of luscious palms and tropical plants. Many of the exotic species were brought from overseas when Malaga was an important world trading centre.

7. Feast your eyes on the Atarazana Central Market

At Malaga’s central market, you’ll find a mind-boggling array of stalls selling fresh fish, meat, cheese, fruit and vegetables – and all at an astonishingly affordable price.  If you don’t trust yourself to be let loose on the delectable offerings though just stay outside – the building’s unique mix of 14th and 19th century architecture is, in itself, worth a look. 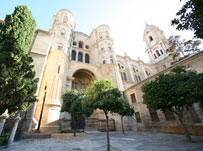 After conquering Malaga from the Moors, the Catholic Kings ordered the construction of a cathedral over the original mosque. The cathedral’s local nickname is “La Manquita” meaning “one-armed lady”, which dervives from the fact that the east tower of the cathedral remains unfinished. The cathedral is particularly impressive at night when the facade is illuminated.

Only a few kilometres north of Malaga city lies the Montes de Malaga Natural Park, a region of dense pine forest, small valleys and waterfalls. Due to its proximity to Malaga, it is a really popular weekend destination for malagueños who want to escape the city and enjoy the stunning natural scenery.

Malaga’s main shopping avenue, Calle Marques de Larios, has a really nice mix of shops, ranging from designer boutiques to more affordable options. Whether you want to splash out on something new, or just indulge in some window shopping, this bustling and historic street is well worth a visit.