Blog - Latest News
You are here: Home / Where can I learn English in California?

Below is more information on each city and the types of English courses that are offered in each location. If you’d like further information on the schools, or on how to choose your course, please don’t hesitate to contact us.

Situated in the southern part of California, on the Pacific coast, Los Angeles is one of the most iconic cities in the world. As the undisputed home of the global film industry, ‘LA’ and the Hollywood Hills have long been a magnet for the rich and famous, but it also attracts hundreds of tourists and students each year. Visitors to Los Angeles can find just about any type of attraction, whether it’s visiting world-class museums like the Getty, attending sporting events involving home teams like the Lakers (basketball) and the Dodgers (baseball), spending time at the beach, or visiting amusement parks like Disneyland.

Los Angeles is a very large city, but has a good network of public transport options that enable you to get around.  It has an amazing nightlife, with hundreds of bars and restaurants to suit all tastes and budgets, although in general the city can be on the expensive side.  That said, living in a city with such lovely weather lends itself to doing lots of outdoor activities, many of which are completely free…

Los Angeles is a great English course option for any students who like the ‘bright lights and the big city’. It’s a very exciting place to be, with lots to do, and is ideal for students who are used to living in big cities and who have enough money to make the most of their time there. English courses available in Los Angeles include General English, Combined English, Intensive English, Exam Preparation English, Cambridge Exam Course English, English and Cinema and English and Surfing. 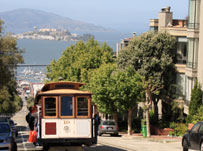 The main city in north California, San Francisco is also on the coast, but has a very different feel to Los Angeles. Where Los Angeles is fashionable and relatively fast-paced, San Francisco is bohemian and laid-back.  It’s a very attractive city, with those world-renowned hills and cable cars that provide spectacular views over the Bay and its famous bridges, but it’s not just the scenery that attracts so many visitors. The city itself is well known for its liberalism, which over the years has enticed a varied and interesting mix of people, and makes the San Francisco of today a real melting pot of cultures.

Although San Francisco is a large place, it seems less daunting than other big American cities.  There are lots of parks and green spaces to enjoy, and in general local people are very welcoming. San Francisco can also be expensive, but the prices are generally lower than in New York or LA.

San Francisco attracts all kinds of English learners, but is especially suited to anyone who is interested in culture and the arts. The city has a huge arts and music scene that can be enjoyed in time outside of lessons. English course options in the city include General English, Individual English, Combined English, Intensive English, Business English, Academic Year English, Exam Preparation English, Juniors English and CPE/CAE Preparation. 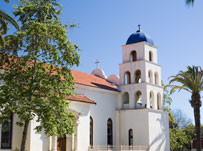 Located right at the southern tip of California, just over the border from Mexico, San Diego is a lovely city with a near perfect climate. It enjoys a fantastic pace of life, and plenty of space in the city, the beaches and the parks – all of which are top-class. San Diego’s proximity to Mexico gives it has a definite Spanish flavour, not only in terms of the culture and atmosphere but also the architecture – the old Spanish colonial buildings of Balboa Park and the Old Town very much reflect the character and history of the city.

San Diego isn’t quite as big as LA or San Francisco, and is also less expensive. San Diego is an ideal English study destination for anyone who enjoys being outside, and being in the sunshine, and there are a huge range of courses on offer. Courses to choose from include General English, Individual English, Combined English, Intensive English, Business English, Exam Preparation English, English and Surfing and CAE/FCE Preparation.