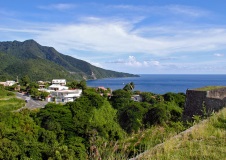 It’s a great place to practise French, particularly during the cold winter months, and although relatively undiscovered by mainstream tourists, has plenty to offer any visitor.

Here are ten facts about Guadeloupe that you may not already know.

1. Guadeloupe is an archipelago of nine inhabited islands, including the butterfly shaped islands of Basse-Terre and Grande-Terre, Marie-Galante, La Desirade, Iles des Saintes (2), Saint-Barthelemy, Iles de la Petite Terre, and Saint-Martin (the French part of the island of Saint Martin).

2. The Amerindian inhabitants called Guadeloupe “Karukera” which means “Island of Beautiful Waters”.  It is widely regarded as having some of the best dive sites in the world.

4. Christopher Columbus came across the islands in 1493, and named them after a Spanish monastery, but the Carib indians who lived there resisted Spanish attempts to settle the islands. French colonists arrived in the 17th century though, and it became a French colony in 1635.

5. There were several British occupations of Guadeloupe in the 18th and early 19th centuries, and a short period of Swedish rule, before it was restored to France. It became an official French department in 1946, and since the 1980s is a region of France.

6. The islands have lovely white sand beaches, a rainforest that is brimming with wildlife, and, if that weren’t enough, the highest waterfall in the Caribbean!

8. The famous dance of the island is called the biguine, which is still performed in colourful Creole dress.

9. There are regular flights to Guadeloupe from other Caribbean islands, and also from Miami, Montreal and Paris. There are also ferry services from nearby islands such as Martinique and St Lucia.

10.The best time to visit Guadeloupe is from December to May when the weather is warm and dry. The rest of the year is usually hot, humid and wet, especially between July and November.

Find out more about French courses with Cactus.

What will I achieve in a 1-week course? Life after the CELTA - an update from our 2010 Suzanne Furstner Foundation...
Scroll to top