Blog - Latest News
You are here: Home / 10 FREE things to do in Rome

Although the city has a reputation for being expensive in comparison to other Italian cities, there are plenty of activities that will give you an insight into the history and culture of Italy’s capital totally free of charge.

One of Rome’s most historic and iconic buildings, the pantheon was commissioned by Marcus Agrippa as a temple to all the gods of Ancient Rome, and rebuilt by Emperor Hadrian in about 126 AD. Since the Renaissance the Pantheon has been used as a tomb, and serves as a final resting place for the likes of painters Raphael and Annibale Carracci, the composer Arcangelo Corelli, and former kings of Italy Vittorio Emmanuele II and Umberto I. The Pantheon is still used as a church and masses are celebrated there, in particular on important Catholic days of obligation and weddings. Contrary to what you may expect, entrance is free of charge. It’s worth bearing in mind also that Angel Tours offer a free 30 minute tour of the pantheon every night at 7pm.

2. Watch the world go by on the Spanish Steps

Another of Rome’s most famous features, the Spanish Steps are located in an up-market area of Rome, and were built to join the Piazza di Spagna with the church of Trinita dei Monti. During the 18th century, the Spanish Steps became a popular meeting place for artists and models but these days it’s generally only tourists that you’ll find! Whether you want to walk up to the top, or just sit on one of the steps, they offer a great place to take in the sights and sounds of the surroundings and rest your legs.

3. Go and see the Trevi Fountain

The Trevi fountain is renowned the world over and seeing the 25 metre structure and all its intricate carvings in person will not disappoint. Of course, looking at the fountain is free, but if you want to uphold the tradition and throw a coin over your shoulder to ensure that you’ll return your Rome, you might have to part with a cent or two!

4. Have a walk around the Villa Borghese Gardens 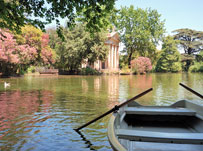 Just to the north of the centre of Rome is the large and well-kept park known as the Villa Borghese. The heart-shaped park is named after the building to which these were originally the private grounds – that building, on the eastern side of the park, now houses the impressive Galleria Borghese. On sunny days the park is full of people reading, relaxing and picnicking although there are several things to see within the park including a full-scale reconstruction of Shakespeare’s Globe Theatre and a large zoo.  Entry to the park is free of charge although a visit to either the Galleria Borghese or the zoo will cost you an entrance fee.

Trastevere is a picturesque, medieval area located on the west bank of the Tiber. You can wander the labyrinthine cobbled streets and imagine what the Rome of centuries gone by might have looked like. Often described as ‘Bohemian’, Travestere isn’t as polished as other parts of Rome, but this is where its charm lies – walking around this part of the city you will feel more like you’re exploring a typical Italian town than the country’s sprawling capital.

6. Get a great view of Rome from the Gianicolo Hill

From the Trastevere area, you can head up to Gianicolo Hill (Janiculum in English) for a fantastic view of the city. Obviously, this involves an ascent, but there is a bus that you can take if you don’t feel up for the climb!

7. Soak up the vibrant atmosphere in the Campo dei Fiori

Campo dei Fiore is a typical Roman Piazza, located between the Tiber River and Piazza Navona. The words “Campo Dei Fiori” translates as “field of flowers,” and the piazza area was so named because the Campo Dei Fiori lies on what was once a meadow. These days the square is best known for the market that it hosts everyday, with a huge and colourful range of fresh vegetables, flowers and other produce from the Rome area. The market opens early in the morning and closes during lunchtime.

8. Test your truthfulness at the ‘Bocca della Verità’ 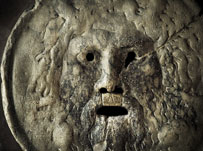 Anyone who has seen the film Roman Holiday will be familiar with this famous aspect of Roman folklore! Set into the wall of the portico of Santa Maria in Cosmedin, the ‘mouth of truth’ is thought to be an ancient drain cover, and according to medieval folklore if you stick your fingers in the mouth and tell a lie, the Bocca della Veritá will bite your fingers off…

9. Take a stroll through Piazza Navona

Another of Rome’s most famous squares, Piazza Navona is bustling all day long. The cafes and bars can be outrageously expensive, but you can soak up the lively atmosphere for free and watch the various musical performers that converge there throughout the main tourist season.

10. Visit the crypt of Cappuchin friars

Located in the church of Santa Maria della Concezione, on Via Veneto, this crypt is unique in that since the 17th century the walls and ceilings have been decorated with the bones of 4,000 monks. It might not be to all tastes, but despite its macabre image, is well worth a look.

Cactus offers a variety of Italian language courses in Rome at a range of levels. For full listings and to book please visit the Cactus Language website.