Blog - Latest News
You are here: Home / Gary Hogarth tells us his story of how he met his wife and how learning... 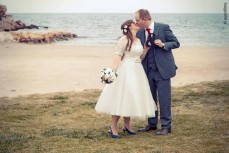 There are many reasons to start learning a new language – work, personal development, even just simple curiosity – but for me, a self confessed language phobic, there was only one thing that could get me learning again…love.

I come from a typical English family. We have visited the same resort on the Costa Del Sol many times, each time spending a sunny week in “England on Sea” with its Irish bars, English breakfasts and expats. The only Spanish I ever knew (and rarely used) was a few choice phrases enabling me to find the bathroom or order a beer.

Then, three and a half years ago, I met Thais through a mutual friend and was instantly smitten with this girl from Barcelona. At first I was lazy on the language front, relying solely on her amazing level of English, but after my first trip to visit her family it became clear that if I wanted to communicate with her family and friends, I would need to learn Spanish.

Decision made, I now had to figure out how best to go about studying. A quick Google search for Spanish classes in London brings up many different schools trying to get your business. However, time and time again I saw Cactus’ name popping up. When I investigated further, I was pleased that Cactus offered classes at times, levels and prices that suited me perfectly. I booked my first course starting in January 2011, a set of ten weekly two hour lessons at a London Bridge school.

I arrived for my first lesson far too early and a little nervous. The room was laid out like a classroom with desks in rows, so I chose mine and introduced myself to a few other early arrivals. A few minutes later, our teacher Conception (or Imma as we called her) arrived and immediately got us moving the desks into a much more relaxed semicircle. The group was a reasonable size which is normal for a Level 1 course and really good as you get to practise with many different people. Over the 10 week course I managed to become remarkably conversational in the areas/tenses I had learnt, helped by the excellent teaching, the reading materials and the podcasts provided. I also met lots of new and interesting people
(Nathan, Zoe, Will) and learnt a couple of important Spanish lessons that have stayed with me to today:

I was so pleased with my level of Spanish after my first course I decided to go straight into Level 2 in March 2011. I was lucky enough to have the same teacher and many of the same people who were in my Level 1 class. The group was a lot smaller which was good as we had more one on one time with Imma and were able to ask more questions. The class, as with Level 1, was lively and conducted entirely in Spanish (English was only used to clarify if needed). I had a great time and again made lots of new friends, so much so that on the last evening we all went out for tapas (with the teacher as well).

I spent the summer using my new found Spanish skills on holiday in Florida after asking Thais to be my wife (¿Quieres casarte conmigo?). By September I was ready for a booster course before a Christmas/New Year holiday to Barcelona where I wanted to put my Spanish skills to the test with my future extended family. I registered for an intensive 5 week Level 3 course at the Picaddilly school with a new teacher Eduardo; this would be split into 2 evenings a week and the class was a lot smaller (4-5 people). I found that the intensiveness really suited me and helped me to focus on learning Spanish. Eduardo remains to this day one of the best Spanish teachers I have ever had.

I thought after these courses I would take a break from learning, as with a wedding in Spain to plan I wouldn’t have time for lessons, but it was early 2012 when I saw an interesting photo competition on Facebook from Cactus. I entered a photo and thought nothing of it, as I never win anything anyway. Much to my surprise I received an email a few months later telling me I had won a week’s intensive language course in Valencia. I was speechless and booked my flights the next day.

Cactus not only offers great courses here in the UK, but has partnered with some of the best language schools in other countries to offer residential intensive courses. Mine was in Valencia at the amazing Taronja school. I would be staying in a shared flat with eight other students (I got my own room) from around the globe, classes were either morning or afternoon and consisted of four hours a day with two different teachers. I had Ana and Maria Jose and really enjoyed the lively lessons and course content.

In addition to the classes, my study was supported by just being in Spain and speaking/hearing the Spanish language. So after a class, a new French friend and I went to Mercadona (a supermarket). It was really fun walking around a foreign supermarket speaking Spanish (and some English) and good practice for later.

What made the trip for me, though, was the total immersion of it all. Free afternoons and evenings were filled with activities and outings organised by the school (some at no extra cost). Activities included an “Intercambio” or language exchange, a Paella night, a Salsa night, a trip to a Bodega and a walking tour of Valencia. Throughout all these trips we were speaking as much Spanish as possible. This really made the trip feel like a holiday and not like going to school.

When I got back to the UK Thais was truly shocked at how fluent I had become, and I was ecstatic with my level of Spanish, so much so that I have returned for a further 2 week stay since then (I even got to see some of my old friends).

Now all of this was for a reason – love – more importantly, for my wedding speech. I got married on the 26th May 2013 on a beach south of Barcelona. I was so nervous – but not about getting married. I was nervous because I knew that both the guests at the wedding and the speech in my pocket were over 50% Spanish. I am pleased to say that I performed the speech without disaster and I think I rendered a few of my Spanish family speechless. My wedding was not only the happiest day of my life but the proudest as well. Thanks in part to Cactus.

Many thanks to Gary for taking the time to tell me about his experience and to hopefully inspiring others to learn a language.

If you would like to find out more about Gary Hogarth’s Spanish learning experiences, then check out his blog: www.sociallyacceptablegeek.com or follow him on Twitter @garyhogarth

The photo at the beginning of this article was kindly contributed by Gary taken and taken at his wedding by Even Films www.evenfilms.com

Cactus Language Training offers a variety of language courses in a range of languages throughout the UK, US and the world. 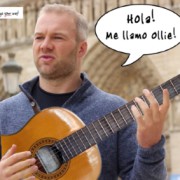 Ollie Phillips Spain - what do you want him to do? 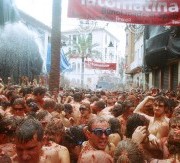 The tomato fight: top 10 phrases in Spanish to help you survive La Tomatina!

Top spots in Brooklyn: according to staff at the Brooklyn School of Languag...