Blog - Latest News
You are here: Home / Ramadan in Morocco: my experience as a foreigner 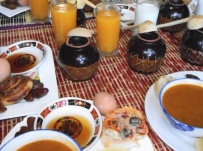 Assistant Director of Studies Leticia Artiles Gracia, who lives and works part-time in Morocco, discovers that Ramadan is both an eye-opening and a heart-warming experience.

My language and cultural immersion continues and I cannot describe how enriching this whole experience is turning out to be.

I continue to find the language really difficult; it’s not that the more you learn the easier it becomes, but the other way around. This is, however, challenging and motivating: I’m definitely not giving up.

I have just spent 4 weeks in Brighton working and came back 3 days after Ramadan had started. First time ever I am in a Muslim country during this holy month for them and it’s definitely a whole new experience for me.

Most people may think that Ramadan is just about not eating and drinking while there is daylight, but there is a lot more to it than the simple act of fasting: simple may not be the right word as it must be anything but simple. It’s true that the most known part is the fact that Muslims fast for a whole month, from dawn to sunset. This means refraining from eating, drinking liquids, smoking, sexual relationships and even swearing.

The month of Ramadan is the ninth month of the Islamic calendar and this month is regarded as one of the 5 Pillars of Islam. This year it took place between the beginning of July and the beginning of August and the start and end dates vary from country to country. In Morocco it started on 9th July and it ended on 9th August with what is called Eid al Iftar: a 3 day holiday where a lot of celebrations take place and presents are exchanged.

Regardless of how much people follow religion during the rest of the year, Ramadan is something everyone in Morocco does (except people belonging to other religions or atheists). But it’s not my intention to deepen into the theory of Ramadan – more to share my experience as a foreigner in Morocco during this month.

It really gives me a sense of peace and joy to see how they all become one. The fact that everyone is doing the same and they all follow the same patterns is something I have never experienced before.
During Ramadan many things changed before my eyes. Streets were full of people from around 10pm but what was surprising is that it wasn’t only men; there were lots of women and children too. Having said that, the complete opposite happened every day from around 6.30pm until 8.30pm, the time when everyone would run home to have Iftar with their relatives or friends.

Most days, at this time, I just sat on my terrace or went for a walk to enjoy what a couple of months ago I thought it was impossible: silence…

Another big change I observed during this month was women’s clothing. Because this is a spiritual month they all put away their usual clothes (no matter how traditional or how modern they normally dress) and opt for a more modest way of dressing: generally the djellabas. Women wear them in so many different colours and patterns that it made the landscape even more beautiful to my eyes.

As it is also a time for even more praying, the mosques became so full that they even had to create some extra space in their patios and in the streets for men to come to pray, especially for the prayer after the break of the fast.

But it also has its negative side: arguments and conflicts in the streets are more usual during this period as people tend to be in a bad mood when they cannot smoke and eat. And also people use their cars more as they all want to be home on time to break the fast with their families, so you have to be extra careful when you are on the road.

I had the pleasure to join friends some days for Iftar and I absolutely loved the experience. The ritual is quite impressive as they all sit at the table with all the food ready, but they do not start eating until they get the sign that the they can do so, which is announced by the call to prayer. Then they start by eating some dates and drinking either milk or water or juice.

The meal varies depending on the place and the different families but usually consists of a harira (soup made of chick peas, lentils, meat, egg, flour, etc) served with bowls of dates and hardboiled eggs sprinkled with salts and cumin. On the table you might also find Msemen, Harsha and other Moroccan bakery specialities and sweets such as Chebekia or Sfouf. But what cannot lack are drinks. They drink all that they have not been able to drink during the whole day (water, juice, tea, coffee, milk, etc.). After this meal, some people have another one at around 10pm and yet another one before 3am. Night-time hours are spent walking the streets, in cafes or watching TV and chatting to the family.

Life for the Moroccans changes so much during this month. Many people stay up through the night and sleep during the day – including those who work normal hours during the day, which means that their hours of sleep during this month are almost halved. I don’t know how they do it but they manage to function well, although they do look very tired all day long. If you walk through the parks during the day, you see many people lying on the grass sleeping but I guess those are the ones that don’t work or those that own their own shops and will work during the night.

Ramadan is a month for spending time with the family and friends, socialising, caring, sharing, praying… It’s definitely not easy, but it’s something they are used to doing and they love it!

And I loved seeing how it is and sharing it with so many friends who opened their homes and hearts to help me experience it to the full. 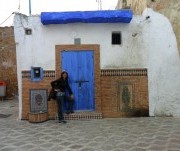 Time flies in Morocco which clashes with the idea that Moroccan people take things easy………….
0 replies