Blog - Latest News
You are here: Home / Lyon: The top 5 places to eat 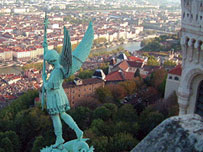 From tartines to seafood to the traditional ‘bouchon’ restaurant, Adrienne Mansard tells us exactly where to go when we get hungry in Lyon… 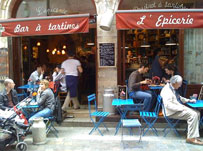 The first of two tartine restaurants on this list, L’Epicerie is located on the presqu’ile and is the perfect place to stop off after a day of shopping and practising your French. The restaurant serves a good variety of tartines (open face sandwiches topped with the freshest and most delicious ingredients) and manages to make the simplest ingredients somehow more amazing than you ever thought humanly possible. Order the tomato pesto mozzarella tartine for lunch and a fruit tart for dessert and your concept of a simple meal will change completely. Not only that, but the prices are a bargain in Lyon and they’ll let you nurse your coffee for as long as you need to rest your tired, travelling feet. 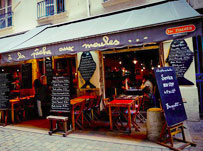 If you’re looking for the best seafood in Lyon, this is the place to go. The restaurant is nautically themed and the staff are exceptionally friendly to foreigners and locals alike. While everything on the menu is worth a try, the best item on the menu is the mussels, which come with the sauce of your choice. After ordering, you’ll be given a pot of mussels bigger than your head that you swear you won’t finish. That is, of course, until you taste it, and realize that to leave a drop of this food untouched would be a crime against the French. It is THAT good. If you have trouble deciding which sauce to order, go with the Moules Provencales; you won’t be sorry. 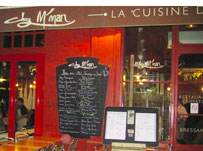 Let me just say this, there is a stovetop hanging from the ceiling. Let me repeat, there is a stovetop hanging from the ceiling. If that doesn’t spell charming, I’m not sure what does. This little place, located just around the corner from Place Bellecour is as traditionally French as can be and, unlike most restaurants in Lyon, it offers menu options from the differing regions of France so you can try more than just the typical Lyonnaise cuisine if you feel like mixing things up. The restaurant is always lively and the atmosphere is warm and welcoming, so much so that you’ll feel like part of the family every time you walk in – as if someone’s “Maman” really is in the kitchen making food for whoever decides to stop by.

This tartine restaurant in Vieux Lyon is the second on our list and is the one you’ll tell all your friends about during your many hours of reminiscing about Lyon. They serve a variety of sweet and savoury tartines, salads, cheese and charcuterie plates that will definitely make you wonder why you don’t just take a leap of faith and move to France for the food and the food alone. Beyond the mouth-watering food, the restaurant is also a history lesson of Lyon with medieval archways and original rock walls from the 14th century. To add to the already charming atmosphere, your food will arrive via dumbwaiter from the upstairs kitchen and, if you’re in the mood for some fun beyond the joys of dining, there are board games available that you can take out and play at your leisure. It’s as if they never want you to leave, and trust me, you won’t want to. 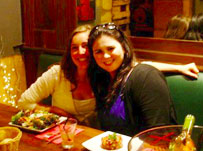 Lyon is known throughout the world for its “bouchons,” a type of restaurant specific to Lyon serving traditional Lyonnais cooking. The restaurants are small, the energy is warm, and the owners are almost always present and friendly. But there is one that goes above and beyond all the rest in Lyon. Tucked away on a quiet street in Vieux Lyon, Aux 24 Colonnes is by far the best bouchon in town and the local’s best kept secret. The food is simple and delicious and the warmth and generosity of the owner checking in on you throughout your meal is the stuff of French legends. You’ll begin to wonder how a man like him even exists and why you can’t take him home with you when the meal is over. The food is traditional Lyonnaise cuisine and so good that it will actually make you swoon. Trust me, I have swooned here many times, and each time is better than the last. So go there hungry and be prepared for the possibility of a substantial food orgasm that will leave you in a state of bliss that only France can provide.  Also, if you stay there long enough until the bulk of service is over, you might just end up being serenaded by a guitar playing chef relaxing after a hard night’s work. I know, it sounds too French and too good to be true. But I swear, it’s real, and it’s waiting for you in Lyon. (Adrienne is pictured here with a friend enjoying an evening at Aux 24 Colonnes).

Cactus offers a variety of French courses in Lyon and in other cities across France.

We also offer language holidays in another 30 languages, in 60 countries and 500 destinations worldwide.