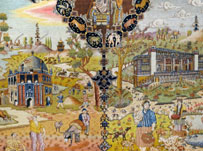 Norooz is the Iranian New Year. In harmony with the rebirth of nature, the Persian New Year Celebration always begins on the first day of Spring, March 20th of each year.

Norooz (meaning “New Day” in Persian) ceremonies are symbolic representations of two ancient concepts – the End and Rebirth. About 3,000 years ago Persian’s major religion was Zoroastrianism, named in honour of its founder Zoroaster, and arguably the world’s first monotheistic religion. Zoroastrians had a festival called “Farvardgan” which lasted ten days, and took place at the end of the solar year. It is said that this was a festival of sorrow and mourning, signifying the end of life, while the festival of Norooz at the beginning of Spring signified rebirth, and was a time of great joy and celebration.

Norooz sinifies hope, peace and prosperity and has been celebrated among people regardless of ethnic background, political views or religion in many countries around the globe, such as Iran, Afghanistan, Azerbaijan, Turkey, Uzbekistan, Pakistan, Georgia, Iraq, Tajikistan, Syria, Armenia and India.

Some of the activities during Norooz include spring cleaning, buying new clothes, painting eggs, family reunion, giving presents, visiting neighbours and friends and celebrating with a picnic on the 13th day of Spring.