You are here: Home / las fallas 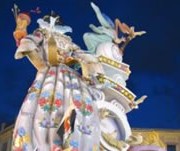 If you’ve not heard of Las Fallas, let its meaning of ‘the fires’ in Valencian give you a clue. True to its name, Las Fallas is a spectacular pyrotechnic festival like none you have seen before; it is one of Spain’s most famous and certainly one of the world’s most unique. Taking place in the usually calm city of Valencia each March, be warned that this is a fiesta for those who like noise and little sleep.

Dates to note for this year are 15th – 19th March 2014, which mark five wild days of fireworks, fires, explosions, parades and, in true Spanish style, partying long into the night. All this is held in honour of St Joseph, which marks Father’s Day in Spain, and in celebration of the arrival of Spring as the long days of Winter draw to a close. Paella contests and beauty pageants even find their way into the celebrations.

Centre stage at Las Fallas, however, are the ninots, giant papier-mâché figures that are paraded through the streets and left to tower up to 20 feet over the crowds for the duration of the festival. Often exaggerated and ranging from playful to grotesque, these figures satirise political figures, bullfighters and all kinds of tv, sports and film personalities, who appear in colourful caricature across the city for all to see – at least, that is, until the final night.

Having been pain-stakingly created in the months leading up to the festival, the climax of Las Fallas is the burning of these monumental effigies in one fell swoop at the very end. Known as the cremà, this ritual sees some 300 firemen on standby and ambulances ready to whisk the faint-hearted off to hospital – a dramatic but necessary precaution, given the extent and exuberance of the fires.

It is a similar situation with the mascleta, which takes place in the Plaza del Ayuntamiento at 2pm each day of the festival. In this event different neighbourhoods of Valencia compete for the most impressive display of fireworks, firecrackers and rockets, culminating in the terremoto (literally, earthquake), as everything explodes simultaneously. It may come as no surprise that pregnant women are unable to attend the mascleta, for even regular healthy people have been known to succumb to the ‘heat’ of it all.

Valencians wouldn’t have it any other way though. This is their festival and they are rightly proud of it. Each year they channel energy, life and extravagance into Las Fallas, resulting in a 5-day-long fireworks party matched by no other. You could take your ear plugs, but then that would ruin half the fun…

Cactus offers Spanish courses in Valencia and in other locations across Spain.