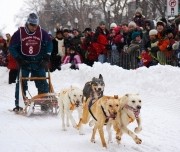 To experience a true winter wonderland there is no better place than Québec in February…perfect for the young and the young at heart!

It may be cold in Canada, but they sure know how to use the weather to their advantage. For two weeks each year, the snow and ice so familiar of a Canadian winter transform Québec City, a UNESCO World Heritage Site, into a magical winter wonderland, as visitors and locals wrap up to celebrate the Québec Winter Carnival. 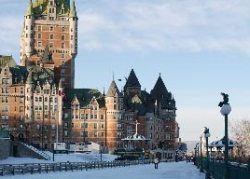 Celebrated in 2015 between January 30th and February 15th, the Québec City Winter Festival is the largest winter carnival in the world. Anyone who missed out on a white Christmas or who just can’t get enough of the white stuff will not be disappointed, for you can’t help but get swept up, rosy-cheeked, in the joie de vivre of this huge outdoor party.

Perhaps the most important feature of the festival is the shimmering Bonhomme Ice Palace, built from some 5,000 blocks of ice, and home to a maze of towers and exhibits as well as a magnificent son et lumiere (light and sound) show. Bonhomme himself is the ubiquitous carnival mascot, a large smiling snowman with a red stocking cap who will welcome you in both French and English (as is common practice in Québec) and pop up cheerily at various points throughout your stay.

Also unmissable during this 2-week period are the colourful night parades, when some half a million spectators brave the sub-zero temperatures to line the streets and watch marching bands, floats and clowns pass by. Pile on the layers and huddle within the crowds and it will be an unforgettable few hours.

If however you’d rather be snuggled up in your ice hotel and wrapped in a bearskin by night – which is entirely possible, given that they build a new Ice Hotel each year for the very purpose – there are plenty of activities to enjoy by day. You may not rush to join in the snow bath, which is exactly as it sounds except you wear nothing more than a swimsuit, but you should certainly catch the legendary canoe race on the St Lawrence River. Not to be thwarted if the water is frozen, teams may resort to pulling their wooden canoes across the ice rather than through the water, and the race will inevitably be completed to much merriment and cheering.

It goes without saying than anyone with kids cannot go wrong by bringing them to Québec during the festival. There are countless activities to keep the little ones entertained, including a huge Children’s Village at The Plains of Abraham, former site of the battle in which the British fought the French and conquered Canada. With intricate snow sculptures lining the entrance, this wonderful playground for families offers dogsled and sleigh rides, snow slides and tunnels, snowmobiling, aerial trampolining, an obstacle course, an ice climbing wall, and more.

Other activities going on throughout the festival, for adults and children alike, include snow rafting, the opportunity to spend the night in a tepee or to learn ice fishing, and sampling of traditional Canadian food (the chocolate crepes always go down well).

The list of entertainment goes on, but needless to say this is one way to enjoy all that winter has to offer and see this usually dark and cold time of year in a completely different light. Take the kids or just go and play in the snow yourself – just remember to pack the woollies and you may find that you don’t really notice the cold too much after all.