Blog - Latest News
You are here: Home / English courses in Australia – how to choose your destination

Currently, Cactus offers English courses in Adelaide, Brisbane, Melbourne, Perth and Sydney. All are vibrant, cosmopolitan cities but there are certainly differences between them.

Below are short summaries of what each city can offer, which may help any prospective students decide which to choose as their destination.

1. Has a fantastic arts scene, and is in fact known as the arts capital of Australia. It hosts a huge variety of exhibitions and events all year round.

2. Is said to offer a low-cost of living and a high quality of life – an enviable combination for anyone.

3. Is surrounded by some stunning scenery, with the Mount Lofty Ranges close by and some of Australia’s nicest beaches in the vicinity too.

4. Is well-known as a very multicultural city, and as such is very welcoming of foreigners. The multiculturalism is reflected in both the entertainment and restaurant scene too, which makes it an interesting place to be.

5. Is a very compact city, which makes it very easy for students to get around and means that no accommodation is ever too far from the school.

The school in Adelaide offers General, Intensive and Exam Preparation English courses at a variety of levels. It offers host family accommodation for students. 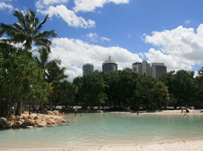 1. Is situated on the sub-tropical east coast of Australia and as such has one of the best climates in the country. It has hot summers and very mild winters, and lots of sunshine!

2. Has a real outdoor-focus and is fantastic for anyone who loves being outside and being active. Beaches, national parks and bush land are all within easy reach.

3. Has the amenities of a big city but has a nice, small-town feel and very friendly people.

4. Boasts a thriving entertainment scene, with a great selection of bars, restaurants, clubs and cinemas.

5. Benefits from a very relaxed lifestyle and a slower pace of life than other cities.

The school in Brisbane offers General, Intensive, Business and Exam Preparation English courses at a variety of levels. Students can choose between host family and residence accommodation. 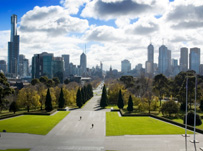 1. Is the second largest city in Australia and has the sophistication that you would expect of an economic and political centre.

2. Is often listed as one of the top three ‘most live-able cities’ in the world.

3. Has lots to offer in the way of history and culture. It has an array of exhibitions, museums and galleries and in 2008 was named a UNESCO City of Literature – only the second city in the world to receive this accolade.

4. Is known as a sporting centre, and has many sporting facilities, including Olympic Park and Melbourne Park. It also hosts the Australian Open Tennis Championships every year.

5. Offers opportunities for shopping, socializing and dining that are second-to-none. You will be spoilt for choice.

The school in Melbourne offers General, Individual, Combined and Intensive English courses at a range of levels. Students can stay in host-family accommodation. 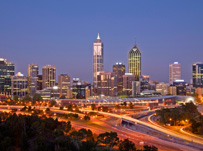 1. Is famous for being the most remote city in the world, but this does have its benefits, including lots of space and friendly, welcoming communities.

2. Is located on the east coast, which means that it’s easier to get to and from countries like Singapore, Malaysia, Thailand or Vietnam. The flight times are a couple of hours less than if you were in other parts of Australia.

3. Is said to be the sunniest capital city in Australia with over three hundred days of sunshine. In fact, it is often called the ‘alfresco city’ given that inhabitants spend so much time outdoors.

4. Has beaches in and around the city which are counted amongst the best in the world. There are endless stretches of white sands and clear blue waters, which is simply paradise for beach lovers and surfers.

5. Offers a really laid-back atmosphere, with just as much importance placed on socialising and being outdoors as on working and studying.

The school in Perth offers General, Individual, Combined and Intensive English courses at a variety of levels. Students can choose between host family accommodation and a room in a shared apartment. 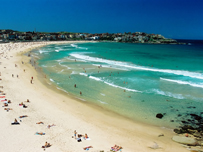 1. Is pretty much unrivalled in its selection of cultural, historic and social offerings. It has something for everyone, no matter what their interests or tastes.

2. Is a really multicultural city, with a population that comprises people from all over the world. There is lots of on offer for international students especially.

3. Is often referred to in the same breath as the likes of London, Tokyo and New York, and it certainly has the same vibrancy and buzz as these other cosmopolitan and forward-thinking cities.

4. Has the best of both worlds in that it has all that you would expect from a large, urban city, but it also has some great beaches and lots of nice green parks.

5. Has a great transport network which makes it very easy to get around the city and visit each distinct area and its highlights.

The school in Sydney offers General and Exam Preparation English courses at a variety of levels. Students are offered host family accommodation.

Learning a language through film Gap year options: the best courses for you
Scroll to top