At the time of writing, the following three courses offer the best value for money in terms of course fees for a general one-week course. Please note that registration fees and course materials are included in these prices.

If you’re looking for an all-round bargain Spanish holiday, you can’t go wrong with the tranquil, northern Guatemalan town of Flores. Popular for its proximity to the magnificent Mayan ruins of Tikal, Flores is also a fascinating destination in itself; situated on an island on Lago Petén Itzá, it is a colonial treasure, filled with attractive colonial buildings, narrow cobblestone streets, historic monuments and charming places to eat and drink out.

With a General Course of 20 lessons priced at £79 / $115, and an Intensive Course of 30 lessons only £99 / $144, this is Spanish tuition at its cheapest. Add to this the general low cost of life in Guatemala, compared to western standards, and you could probably afford to study here for several weeks for the cost of just one week in other locations!

* Special feature: Volunteer opportunities are also available for those who wish to work within the local community in Flores.

Coming in at number two on our scale of cheap courses is the General Spanish Course of 20 weeks in Santo Domingo. Founded in 1496, Santo Domingo is a beautiful colonial city, its centre a protected UNESCO World Heritage Site, its surroundings consisting of endless white beaches, tropical rainforests and tumbling waterfalls.

With a 1-week course costing just £109 / $160, there has never been a better excuse to soak up some Caribbean sunshine for less.

The warm Canary island of Tenerife is home to our third most economical Spanish course. The school is located in the island’s second largest city, San Cristobal de La Laguna, in the north of the island, where 99% of the inhabitants are Spanish-speaking. La Laguna was established in 1496 and became capital of the Canary Islands until their conquest; as such, it boasts numerous historical monuments, palaces and churches, and has been designated a UNESCO World Heritage Centre. As a place to learn Spanish, it is oozing with activities, tradition and culture – and the bonus is you can head to the beach at any time. Take a one-week General Spanish course of 20 lessons for just £139 / $213. 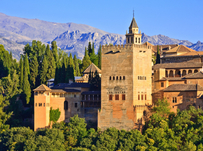 Many people know Granada for its magnificent Muslin palace of the Alhambra, and this certainly sets the scene for what is undoubtedly one of Spain’s most historic and fascinating cities. With the snow-capped peaks of the Sierra Nevada in the distance and the glistening Mediterranean just one hour the other way, anyone coming here to immerse themselves in the culture has plenty of weekend activities to enjoy too – and more money to spend on them all, given the great price of this course, at just £139 / $213 for a General Course of 20 lessons.

Cactus offers Spanish language courses in numerous locations across Spain and Latin America, for all ages and levels, and from as little as one week upwards.

We also offer Spanish part-time and evening courses in the UK and North America for those wishing to learn the basics or brush up on their existing language skills before heading abroad.